The Katabata project, set up by researchers from the University of Liège, aims to measure for the first time the potential of katabatic winds in the south of the Groeland with a view to setting up large wind farms there.

The greatest ecological threat to planet Earth is undoubtedly global warming. Combating it implies, in particular, the need to rapidly replace fossil fuels with decarbonated energies, a major challenge given the extent of our societies' dependence on fossil fuels.

One solution that has recently attracted interest is to exploit variable renewable energy resources of very high quality, often located in remote areas, to produce cheap renewable energy. The latter could be transported using gigantic electrical connections.  Another solution would be to use e-fuels as an energy carrier. E-fuels are energy-rich molecules synthesized from decarbonated electricity, water and gases captured from the air (nitrogen or CO2). They can be easily transported by boat for example.

Prof Damien Ernst of the University of Liège is a strong advocate of exploiting these extreme renewable fields in order to accelerate the energy transition. A few years ago, he even introduced the concept of the Global Grid, an international electricity network that makes it possible to lower the cost of renewables.  The idea is to collect renewable energy from very windy or sunny areas and transport it via high-voltage lines to the consuming regions," explains Damien Ernst. "The global network, which the researcher has designed, is also based on the fact that the problems of fluctuation in renewable energy disappear when it is shared within an international electricity network. "Think of the energy generated from photovoltaic panels, it is never dark at the same time everywhere," he stresses. Greenland has caught the researcher's attention. Studied for many years by scientists from all over the world, Greenland remains infamous for the records it posts each year in terms of the melting of its ice cap. "But Greenland is also a place that records wind regimes complementary to those recorded on the European continent, explains Xavier Fettweis, a FNRS research associate and climatologist at ULiège, especially in the southern region where the synoptic wind (resulting from pressure fields) is added to the katabatic wind (resulting from gravity and descending the ice cap). In this region, wind speeds can reach from 180 to more than 200km/h locally! "The researcher is well versed in modeling since it is the basis for the development of the MAR - Regional Atmospheric Model, which is used in many scientific climate modeling studies in the Arctic. 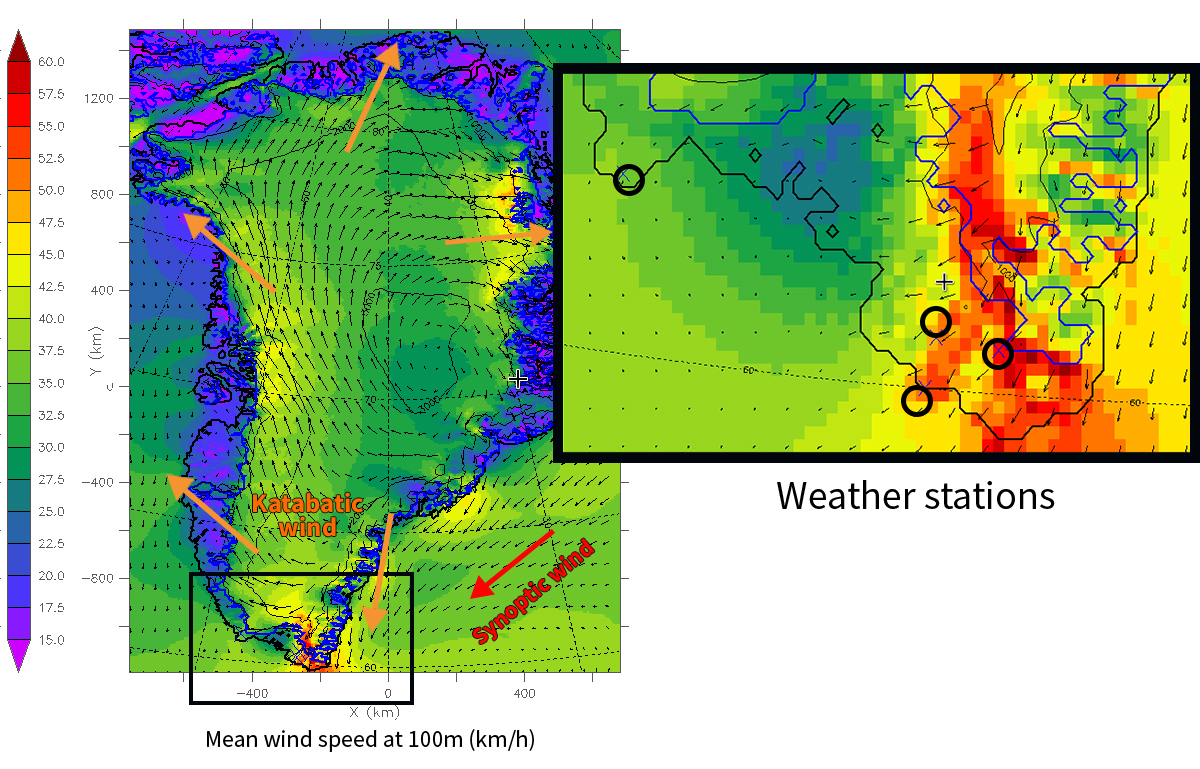 The local "katabatic" wind, which results from the formation of very cold air (and therefore denser and heavier) at the top of the cap, which will then flow along its slopes by gravity, and the large-scale "synoptic" wind (over the ocean for example), which results in particular from the presence of the Icelandic low and the Azores High. South of Greenland, these two winds blow in the same direction and will then add up to blow on average at ~60 km/h with gusts that can reach 180 km/h in winter.

Together, the two researchers from the University of Liège have embarked on a study (1), published in 2019 in the journal Energy, to assess the complementarity of katabatic wind regimes in South Greenland and Western Europe, i.e. to evaluate whether when there is no wind in Europe, there is wind in Greenland and vice versa. In this context, a comparison of wind regimes in Western Europe and Greenland was proposed. Based on the Regional Atmospheric Model (MAR) specifically designed to accurately capture polar phenomena, the local climatic characteristics of southern Greenland were identified as being particularly conducive to the extensive production of renewable electricity from wind. The results of the study demonstrated the existence of a superior and complementary wind generation potential in the South Greenland region compared to selected European sites.

"Our study shows the enormous interest in using the wind potential associated with these quasi-constant katabatic winds coming down from the cap," explains Damien Ernst. It is obvious that creating an electrical connection between Greenland and Europe would be interesting, but given the high load rate of the wind turbines, it would also be a dream location to produce low-cost e-fuels, these green fuels. In this respect, I think that cheap synthetic methane made from green electricity, hydrogen produced from electrolysis of water and CO2 captured from the atmosphere could be made there. "Clearly, replacing fossil CH4 with cheap synthetic CH4 would be one of the quickest ways to decarbonize, for example, the heating sector or industry, which is a very large consumer of CH4.

However, a problem exists as Xavier Fettweis points out: "No in situ observations in these wind corridors are available to validate the MAR model estimates. The only wind observations available come from small villages and harbours that are sheltered from the prevailing wind to protect themselves from the cold". Without real measurements of these winds, no industrialist will want to embark on the adventure of collecting renewable energy in Greenland," adds Damien Ernst.  This mission is therefore necessary if we really want our research to have an impact on the energy transition. We hope that with the data collected in this project, the government and industry will realize the interest that such sites can have in accelerating the energy transition. "These data will also be used to validate the MAR model and to study katabatic upsurges where in a few minutes the wind can change from more than 100km/h to 10 km/h due to complex meteorological phenomena.

The two researchers share deep down in their worrying conviction that if the energy transition is approached as it is now, it will be too late to avoid the disastrous effects of climate change. We need to change scale, to be more ambitious technologically and industrially. And, for them, the Katabata project is the seed that needs to be planted to see the emergence of a real and credible ambition to decarbonise the energy sector quickly and cheaply.

In this observation was born the KATABATA project. Set up by Damien Ernst (engineer at the  Montefiore Institute of the ULiège) and Xavier Fettweis (Climatologist at the research unit SPHERES of ULiège), the Katabata project aims at compensating for the lack of information due precisely to the lack of in situ observations, and thus to the collection of important data allowing to establish a project of implantation of a wind farm in the southern region of Greenland. Within the framework of the KATABATA project, which will run for a period of three years, three automatic weather stations will be installed in southern Greenland (see map). Two of these stations will be installed on small islands (where the MAR model has identified wind maxima) potentially interesting in terms of wind regime, non mountainous and snow-free in summer. The third one will be installed in a glacial valley, potentially sheltering exceptional wind regimes.

From the Finnish brand Vaisala, these stations will allow to measure winds, temperature and humidity at 10 meters every 15min. These data will then be retransmitted to a server in Uliège via a satellite connection.

The stations will be installed by  Michaël Fonder, PhD researcher at the Montefiore Research Unit of ULiège.  To reach the south of Greenland, Michaël will embark on board a sailing ship, the one of the French expedition Unu Mondo , a scientific and educational expedition, whose mainsail will proudly bear the ULiège coat of arms.